A 2.5 Mile Run and a Pumped Up Playlist

Good morning! Can you believe that there are only three days until Christmas? Where does the time go?! It seems like just yesterday we were celebrating last Christmas and making resolutions for 2009.

Yesterday's training run called for a quick 2.5 miles. Since I'm not a morning runner and it gets dark at oh, 4:15 PM, this meant running around the track at the local Y. I suppose I could have gone on the treadmill but I try to avoid them unless there is no other option. 2.5 miles on the track is approximately 23 laps, as 9.1 laps around = 1 mile. Although it gets somewhat repetitive, the track loops around the aerobics studio. Yesterday I was entertained by the kickboxing class. Instead of the normal two blocks on their steps, the instructor apparently amped it up a notch, since the attendees were stepping onto platforms that were about 8 blocks high. It looked intense and made me happy that I was running.

The run was uneventful aside from the beginning: when my right foot first struck down, I felt a searing pain on the top of my right foot. This has happened only once before, and it kind of freaks me out. It goes away after a few steps, but it's something that I'm going to keep an eye on.

A crucial element of getting through indoor (read: boring) runs is a great playlist. I have a fairly eclectic taste in music inasmuch as I like pretty much anything. Well, except for classic rock (sorry dad). I could never get into it. Anyway, I look for songs to keep me motivated and entertained during the run. Sometimes I think my fellow gymgoers thing I'm a crazy person, since I love some of the songs so much that I can't help but mouth along (silently- no one needs to hear my frightening singing voice- let's just say I was cut from chorus in grade school when they didn't make cuts) when my favorites come on.

I compiled this list when I ran my first 5k back in September (aside from the new addition of Empire State of Mind- I don't think it was out yet) and I still am not sick of it. My absolute favorite on the list may be Viva la Vida (live). I am a huge coldplay fan after seeing them in concert this past fall (for free! but that's a story for another post) and the live version has the crowd cheering and really puts a kick in my step.

What songs are on your go-to playlist?

Today my training schedule calls for a vinyasa flow yoga class, which I am attending at my yoga studio with my friend Kelle. It's her first time checking it out. I've been going to the studio for about six weeks now and it has really grown on me.

Because no post is complete without pictures, here are a few of my favorite holiday pics: 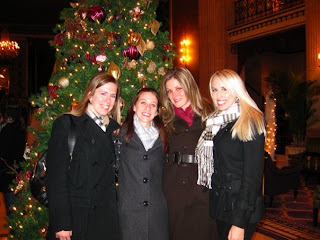 Me, Kristin, Kelle and Jenn at the Roosevelt in NYC, Christmastime 2008 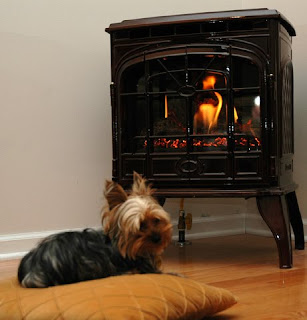 Bailey in front of the fireplace

Katie
I'm a 27 year old attorney that just married (3/27/10)the love of my life, who is currently serving our country overseas. After living a life of eating unhealthily and not really working out, I have committed myself to healthy living. This blog will chronicle the adventures I encounter along the way! Questions or comments? Email me at fittowed at gmail dot com.